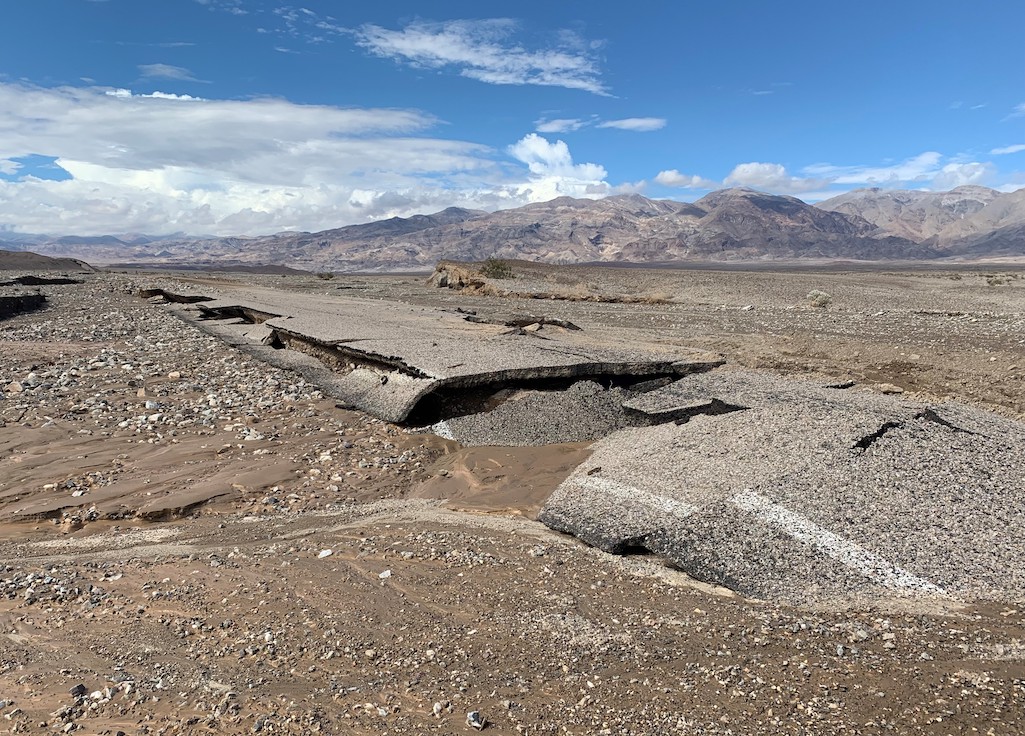 Remains of the Beatty Cutoff Road, one of countless areas of severe road damage in Death Valley / NPS, Mr. Clark

A three-hour rainstorm that dumped nearly 1.5 inches of rain on Death Valley National Park, causing widespread flooding that tore up roads, blew up water systems and shut down the park, was classified as a 1,000-year event by the National Weather Service.

“The heavy rains that caused the devastating flooding in Death Valley were an extremely rare event, lasting 1,000 years,” Daniel Berc, a meteorologist with the National Weather Service Las Vegas, said Sunday. “A 1,000-year event does not mean that it happens once every 1,000 years, but rather that there is a 0.1% chance that it will happen in any given year.”

Friday’s storm caused major impacts on the park, which straddles the California-Nevada border. A critical portion of the Cow Creek water system that serves some park residences as well as park facilities, including the emergency operations building and maintenance yard, was severely damaged, according to a park statement. . More than 600 feet of the water main was blown out by flash floods.

Additionally, many miles of pavement are known to have moderate to severe asphalt damage, with hundreds of miles of roads impacted by debris, the statement added. The condition of the roads was still being assessed, as the damage makes access to certain areas impossible by vehicle.

On Saturday, a helicopter crew from Naval Weapons Station China Lake was able to conduct a thorough aerial search and located several vehicles in remote areas of the park. Rangers were able to contact these visitors and make sure everyone was okay.

The 1.46 inches of rain recorded at Furnace Creek is still preliminary data.

One of many 30ft water pipe sections that were washed away/NPS, R. Wissinger.

Monsoon rains typically reach the southwest during the summer months, bringing much-needed moisture to the region. According to the weather service, the monsoon season runs from June 15 to September. The past few summers have been fairly mild – the 2020 monsoon season was one of the driest on record, according to the service – while this year’s monsoons have generated significant flooding in places such as as Death Valley and Mojave National Preserve, which also recorded extensive road damage from recent storms.

“The latest 3-month outlook shows an increased likelihood of above-normal July-September precipitation for parts of the southwest, with the highest probabilities over southern Arizona,” the weather services predicted. earlier this summer.

The California Department of Transportation plans to reopen portions of Highway 190 in Death Valley by Tuesday, allowing travel between Pahrump, Nevada, and the residential and administrative area of ​​the park in Cow Creek. This will include access to the park visitor center at Furnace Creek, as well as private hotels at Furnace Creek. Park roads are expected to remain closed for days or even months, depending on the severity of the damage.

To date, no injuries have been reported among park visitors or residents due to flooding, which damaged dozens of vehicles in the park, and people who were previously sheltering in place were able to move around cautiously. on damaged roads. No roads in the park are currently open for recreational travel due to ongoing safety concerns and ongoing roadwork.

“Death Valley is an incredible place of extremes,” said park superintendent Mike Reynolds. “It’s the hottest place in the world and the driest place in North America. This week’s millennial flood is another example of this extreme environment. With climate change models predicting more frequent and intense storms, this is a place where you can see climate change in action.