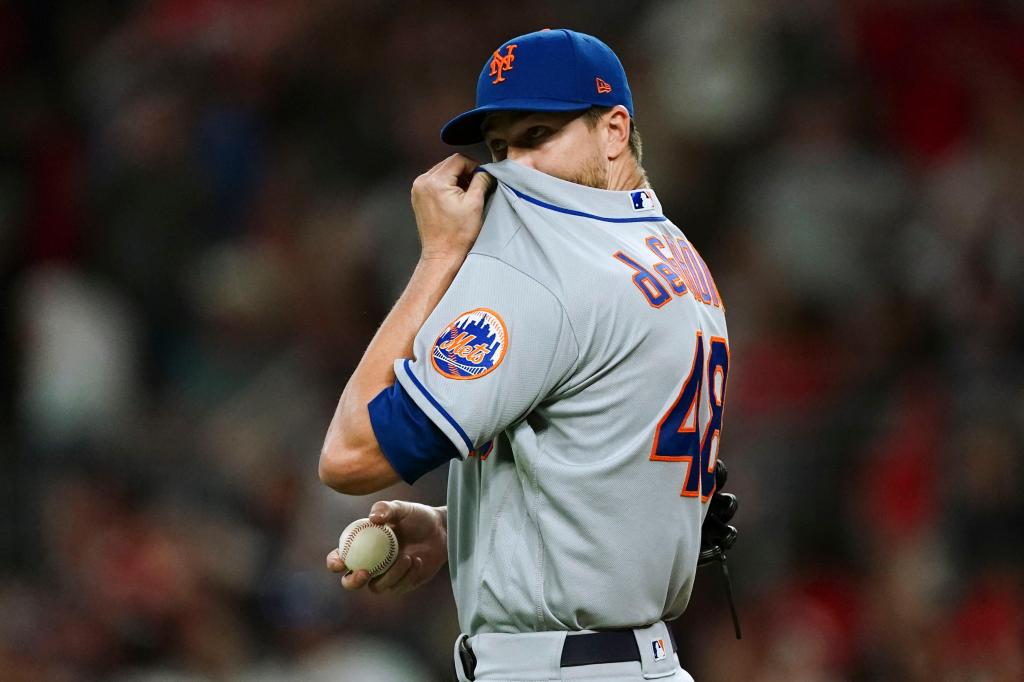 ATLANTA — True to form, Jacob deGrom was mostly dominant Friday night at Truist Park. But his mistakes were big, and the Atlanta Braves made him pay for three mistakes he made in the middle.

The Mets lost 5-2 and both teams are now tied atop the NL East standings with records of 98-59.

With a large crowd on hand to watch a series that will likely determine the division winner, the Mets had their ace on the hill against Atlanta ace left-hander Max Fried. They started well with deGrom pulling the team down in order in the first and the Mets taking a 1-0 lead over Fried and the Braves early in the second.

But the lead was short-lived as deGrom then gave up back-to-back home runs to Austin Riley and Matt Olson at the bottom of the frame. He would give up another to Dansby Swanson in the sixth to put the Mets in a 3-0 hole.

It was deGrom’s second straight loss (5-4) and while it wasn’t as bad as the last time, the two-time Cy Young Award winner was clearly frustrated. DeGrom allowed only the three solo hits and two other hits for five of six innings. He struck out 11, including five in a row in the fourth and fifth innings, and walked none.

Meanwhile, Fried (14-8) was nearly untouchable for five innings, going out with illness after just 71 pitches. Maybe we’ll go back to that game and call it Fried’s flu game, because the Mets only had one run on four hits, all in singles. He struck out three and didn’t make a walk before Bally Sports cameras caught him nearly throwing up into a trash can in the dugout.

Tylor Megill took over from deGrom in the seventh and was scored for two immediately. Matt Olson scored a single to start and former Mets catcher Travis d’Arnaud doubled it at home. A ball from Eddie Rosario scored from Arnaud to make it 5-1 in favor of the home side.

Tomas Nido cut the lead to three runs with a solo home run in the eighth and Eduardo Escobar, who led within five runs for the Mets in a 5-4 win over the Miami Marlins on Wednesday, went 2 for 3 with a double and a step. But it’s clear that the offensive struggles of the start of the week have continued.

In an attempt to unleash a DH point offense, the Mets called top prospect Francisco Alvarez and hit him seventh behind Escobar. He had a few good at-bats, but eventually went 0-for-4 on his debut and retired with the bases loaded in the ninth. It was the only time the Mets were really under threat in the game.

Tyler Naquin fought off Kenley Jansen (38 saves) with two outs and bases loaded, but was eventually struck out on a nine-pitch bat.