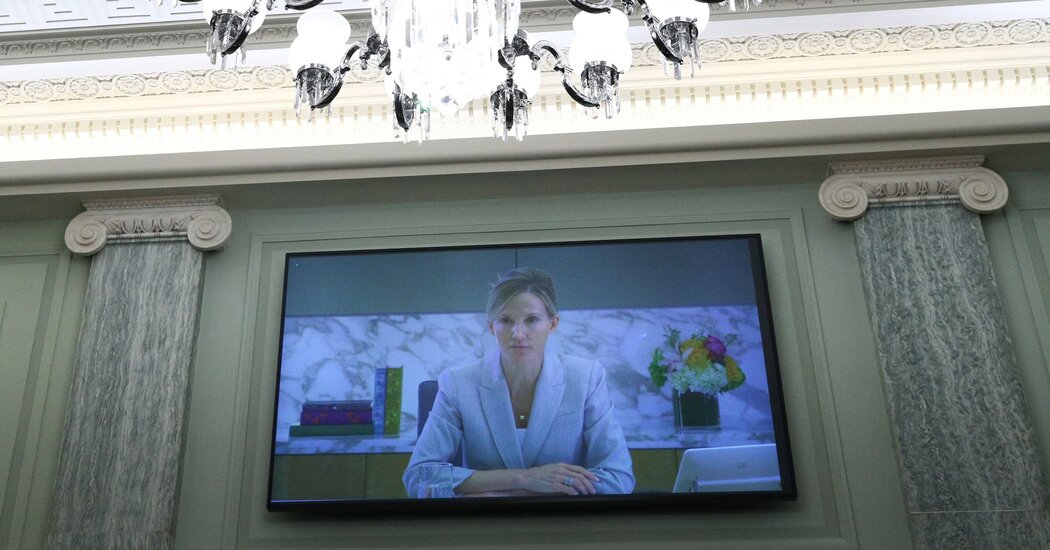 Facebook’s global chief security officer Antigone Davis on Thursday faced tough – and, briefly, existential – questions on Capitol Hill about Instagram’s effect on teens, responding to accusations that the parent company app, Facebook, had known for years that its photo-sharing app had caused mental and emotional damage.

Members of Senate Subcommittee on Consumer Protection berated Ms Davis and Facebook for covering up and downplaying how the company’s services were harming young people and for failing to implement changes to limit these negative effects. A bipartisan commission questioned Ms Davis on issues relating to children and the application of social media.

One question, however, from Sen. Richard Blumenthal, chairman of the subcommittee and Democrat of Connecticut, stood out above the rest, at least for many people watching from home: “Will you pledge to end the finsta?” ?

“Finsta”, a slang term, is widely accepted as a contraction of “fake” and “Insta” (short for Instagram). This is neither an official designation nor a type of account offered by Facebook. Rather, it’s a term many users attribute to the secondary accounts they create for themselves on Instagram, where their identity – and, often, the content of their posts – is withheld from everyone except one. small group of carefully chosen followers.

“False” here does not refer to the owner of the account – finstas are real accounts managed by real people, not bots – but rather distinguishes the private, and to some extent secret, from the “real” public account. For example, many celebrities along with official verified Instagram accounts, they are also believed to maintain private accounts secret for personal use; in such cases, personal accounts would be referred to as finstas.

Accounts with this unofficial designation are generally considered provinces of their owners’ trusted friends – a group that can exclude family members.

The finstas in question at Thursday’s hearing were those of the youngest Instagram users. Senator Blumenthal has, for years, criticized Facebook’s policies governing the privacy and safety of minors.

Earlier in the hearing, Senator Blumenthal appeared to demonstrate a good knowledge of the subject. “The Finstas are fake Instagram accounts,” he said. “The Finstas are the second secret children’s accounts. Finstas are often intended to avoid parental supervision.

He accused Facebook of viewing secret youth sub accounts as “a growth strategy” – a way to increase user activity on the website without having to sign up new users.

“You monetize children by cheating on their parents,” he said. “You make money with these secret accounts.”

But it was the senator’s turn of phrase during questioning, rather than his accusations, that lit up the internet.

“Will you commit to ending the finsta?” He asked, two hours later.

The question met with initial silence from the Facebook rep. Finsta can’t be “ended” any more than, say, “Hot Girl Summer” or “Taco Tuesday,” after all.

“Senator, again let me explain – we don’t actually do finsta,” Ms. Davis finally said. “What ‘finsta’ refers to are young people creating accounts where they may want more privacy. Some teens, she suggested, prefer to have a separate account for interacting “with a small group of friends.”

Senator Blumenthal replied: “Finsta is one of your products or services,” he insisted.

Mrs. Davis tried again. “Finsta is slang for one type of account,” she said, before Senator Blumenthal interrupted her to insist more on the matter, asking her: “Do you want to end this type of account?”

Ms. Davis may not be able to stop the use or circulation of a slang term. But it’s true that Facebook allows people to register more than one account under the same email address – a practice it could eventually end. Instead, he recently started promoting this option: some users reported receiving pop-up messages suggesting that they create an additional Instagram account to “stay with a small group of friends”.

The exchange between Senator Blumenthal and Ms Davis immediately gained attention on Twitter, where a tidal wave of mocking tweets accused the senator of not understanding an issue he was trying to legislate. Many demanded that he retire.

Some Twitter users guessed that Senator Blumenthal had misread the notes of his staff members. Casey Newton, founder and editor-in-chief of Platformer, a publication focused on technology and democracy, tweeted (jokingly): “Run for office promising to end Finsta.” Others lamented the possible loss of their secondary accounts.

On this point, they probably don’t have to worry. Ms Davis would not commit to ending the finsta.